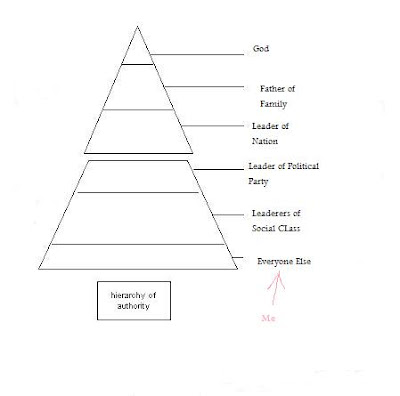 Rod Dreher, "an intellectually serious and culturally engaged Christian," discusses authoritarianism. Or, as he puts it, Truth.

The question of authenticity depends on authority. A friend and I last night were talking about authority and the Catholic Church, and he made the important point that authority only has meaning if it has been accepted by the people.

That is far more true than people realize. Power is given, not taken. We tell ourselves that the powerful control us but they do so only with our permission. If we revolted as other nations did when their living conditions became intolerable, we could take back control and the elite would be in their graves.

What we see among many, many Catholics today is a rejection of traditional Catholic teaching about authority, and the installment of the subjective individual as one's own Magisterium.

Yet my friend is certainly correct: authority, even external authority, means nothing if it is not inwardly appropriated, and furthermore, if that inward appropriation is not shared by others.

This just knocks my fucking socks off. Dreher realizes, dimly, that the people in power impose their version of reality upon others, and that his and their authority means nothing if they can't brainwash people into accepting it and have an entire society constantly reinforcing it.

A revealed, dogmatic religion like Roman Catholicism will have a very difficult time in conditions of modernity, precisely because we are all conditioned to think in terms of the Self as the final arbiter of truth.

Poor, poor Catholic Church. How it suffers because women look at the Church's teachings about the role of women in society and decide that they will follow their own heart and make their own plans, instead of thinking and feeling and doing only what they are told is okay for women to think, feel or do. And let's not even get started on the gays. You see, if you think for yourself you are rejecting the authority of White Males, from God on down to that guy at the convenience store who orders you to smile because he doesn't like to see a pretty young woman with a frown on her face because women should look pleasant and biddable at all times.

To exist in proper relationship with the Truth, I believe, requires passionate inward appropriation of external, objective realities.

In other words, to know if something is true, you must go to the authority and they will tell you what is true. Whatever they say is your Truth. To determine the truth for yourself is selfish, wrong, and immoral, because only the God-backed Authority can do that. And you and everyone else must embrace this Truth with all your heart, or people will question the absolute authority of the Absolute Authority.

The key point is faith that there is a such thing as religious truth independent of my own subjective judgment. If people don't believe that, I don't see how a religion like Christianity is sustainable over the long term, at least not in any meaningful sense.

And we wonder why our country is in so much trouble. We obey our Wall Street Elites and can't believe that they were stupid and dishonest. It must be the fault of the brown-skinned Community Reinvestment Act, since White Male Authority can't be wrong. We cheer our military and give them whatever they want, all our money and our sons and husbands, yet we lose wars anyway. It can't be that our White Male Authority betrayed us to sell guns and grab oil-rich countries. It must be the fault of those brown, immoral Arabs. And what happened to America's jobs? It can't be that the White Male authority is trying to ground down wages to third-world level. It must be the fault of women and illegal brown people for taking jobs away from white men. Authority is always right. Authoritarian followers are always right as long as they are obedient. And everyone else is a threat to the social order, because if even one small child points out the Authority has no clothes, all of Western Civilization will crumble.
Posted by Susan of Texas at 12:48 PM

Great post. The intellectual contortions some people will put themselves through to try to justify a (white) man-made construction of reality that must not be questioned are astonishing.

Good stuff but there's a mis-step in there about Wall Street being "stupid." Like the idea that they are "incompetent," this is a mis-read.

They're neither stupid nor incompetent.

They simply have different goals. They care only about themselves and do not care about destruction that ripples outward, wreaking havoc in its path, damaging people who aren't lucky enough to be among those profiting from the House of Cards gamesmanship played on Wall Street.

It feels good to call them stupid or incompetent, I know. But it's wrong. Factually wrong.

They are highly competent and quite clever. They simply want something that you do not want, and moreover, they do not give a flying fig about what you want. Your happiness, your well-being, your existential wealth... completely irrelevant to them.

Now, you can consider that a "stupid" perspective, but I hate to tell you: it's the dominant perspective in America, among Americans.

The rest of your entry, about the nature of power and it being acceded rather than taken -- very true, except in limited extent such as where someone is arrested and imprisoned, or has his/her life threatened directly, by the institution presently in power.

One's accession to that power isn't very willful in such settings. It's more a matter of survival.

The steps we can take in less urgent situations are manifold, but it takes a lot of courage to take them, and a very strong sense of individuality. Sadly, humans are herd-like creatures who love doing "what's popular" or what is "socially acceptable."

And that's one of the ways in which those who want power, get power. They manipulate the rules of society, to foster approval for things they want personally for private gain.

I agree they didn't act out of stupidity, they were merely carrying out their agenda. But I've also seen people like Rubin and Greenspan act stupidly, although I tend to attribute that to ideology and not lack of brains.

Susan, thanks for this takedown of Dreher. One of the strange things about reading Dreher is that he writes like a lunatic. I mean, he writes about his own inner thoughts and his morality as though he were testifying to his own competence at a psychiatric hearing. Everything he offers to the reader as incontrovertible, accepted, truth is as foreign to my way of thinking about the world as if he were explaining "Everyone knows that the sun rises in the west..." and yet he is sublimely unaware of it. If a given religious insight into anything were "the truth" wouldn't it have the same status as other "truths" that surround us: the rising of the sun, gravity, rocks are hard? Why would it be necessary to continually explain to everyone around him that they've gotten it all wrong? We don't get "things that we all agree on" wrong. We actually all agree.

You know: people have been discussing what truth is, and what authority is, and why it matters, and what it has to do with individual sensory experience, and with education, and the self, and society for fucking ever. There isn't, in fact, one approved way of thinking about these things. Individuals, societies, and cultures have experimented in every way imaginable over the millenia over how to organize these things: self, individual, family, caste, society, nation, religious leader, god (s). And no one way has proved a panacea to the woes of human society. To pretend otherwise is the sign of a deeply confused person. Sometimes I think, reading Dreher, that he can't possibly be so stupid and ill informed. Other times I think: oh yes he can. This is a really damaged person, and the worst part of the damage is that he projects his rage and fear and petty anxieties onto everyone else and demands they follow his wandering path or else suffer some horrific fate.

He doesn't write like a lunatic so much as a petulant child:

we are all conditioned to think in terms of the Self as the final arbiter of truth.

"We are all conditioned to think" my foot. This is the whiny hyperbole of a six year old screaming "YOU NEVER LET ME DO ANYTHING!" at his mother.

And then there's this:

To exist in proper relationship with the Truth, I believe, requires passionate inward appropriation of external, objective realities.

He doesn't believe any such thing. No pious religious believer gives a damn about "external objective realities." Au fucking contraire: it's their inner, subjective "reality" that rules them, and that they're "passionate" about. That's what faith means.