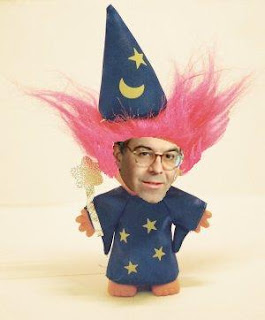 David Brooks sneakily and cleverly* pretends to be a liberal so he can suggest conservative talking points.

I was a liberal Democrat when I was young. I used to wear a green Army jacket with political buttons on it — for Hubert Humphrey, Birch Bayh, John F. Kennedy and Franklin Roosevelt. I even wore that jacket in my high school yearbook photo.

It’s a magic green jacket. I can put it on today and, suddenly, my mind shifts back to the left. I start thinking like a Democrat, feeling a strange accompanying hunger for brown rice.

We do detect some hot air, but as Brooks gives no proof or even examples of the dangers Democrats are facing, we're not too concerned about it.

For example, everybody now hates the bank bailouts and the stress tests. But, the fact is, these are some of the most successful programs in recent memory.

They stabilized the financial system without costing much money. The auto bailout was criticized at the time, but it’s looking pretty good now that General Motors is recovering.

But the magic jacket-wearing me is nervous about the next few years. I’m afraid my party is going to get stuck in the same old debates that we always lose. First, we’re going to have the same old tax debate. We’re going to not extend the Bush tax cuts on the rich. The Republicans will blast us for killing growth and raising taxes as they did in 2000 and 2004.

If liberals are afraid to run against the Republicans' record of disastrous financial governance and starvation taxation, they deserve to lose.

Then we’ll get stuck in the same old spending debate. We’ll point to high unemployment and propose spending programs too small to make much difference. The Republicans will blast us for bankrupting the country with ineffective programs, and the voters are so distrustful of government these days that they’ll side with the Republicans on that one, too.

If the Republicans want to run on getting rid of Social Security and refusing to extend unemployment, then by all means they should do so. In fact, we insist.

So I sit there in my magic green jacket and I wonder: What can my party do to avoid the big government tag that always leads to catastrophe? Then I remember President Obama’s vow to move us beyond the stale old debates. Maybe he couldn’t really do that in the first phase of his presidency when he was busy responding to the economic crisis, but perhaps he can do it now in the second phase.

Not much is going to get passed in the next two years anyway, but the president could lay the groundwork for a whopping second-term agenda: tax simplification, entitlement reform, a new wave of regional innovation clusters, a new wave of marriage-friendly tax policies.

Eventually, I see a party breaking out of old stereotypes, appealing to entrepreneurs and suburbanites again, and I start feeling good about the future. Then I take off the magic green jacket and return to my old center-right self. A chill sweeps over me: Gosh, what if the Democrats really did change in that way?

Yes, Democrats, untold power and success lie just beyond your grasp! All you need to do is become a conservative, and your inevitable success will be your ticket to political dominance!

"It’s a magic green jacket. I can put it on today and, suddenly, my mind shifts back to the left. I start thinking like a Democrat, feeling a strange accompanying hunger for brown rice."

Please tell me you made that up.

"The Republicans will blast us for killing growth and raising taxes as they did in 2000 and 2004."

Uh, yeah. Raising taxes in 1993 and 1996 really killed growth. Can you say "longest peacetime economic expansion in US history"?

"We’ll point to high unemployment and propose spending programs too small to make much difference."

Dear David; Rahm and Bam already BT, DT. Why do you think you're able to yak about the political winds "blowing so fiercely" against a party that is, what, 10 for 10 in special House elections?

The brown rice is a give-away, a smirking dig at "hippies eating natural food", since all Democrats are hippies who believe in Free Love but sneer at the free market.

Every time you come a across a David Brook's piece, please link to John Dolan's David Brooks Blows Bobos: An Exile Classic. It is your civic duty!

For another interpretation of what is wrong with Bobo and his ilk, may I suggest this piece from Doghouse Riley? http://doghouseriley.blogspot.com/2010/07/when-moon-is-in-seventh-house.html

Sadly, the fake magic jacket is all Brooks.

Thanks for the links. And I thought I was harsh!

Yum, "regional innovation clusters"! I haven't had a box of those in ages!