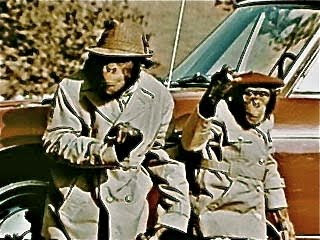 The Agonist points out a deeply improbably article from China.

Afghanistan's Taliban insurgents are training monkeys to use weapons to attack American troops, according to a recent report by a British-based media agency.

Reporters from the media agency spotted and took photos of a few "monkey soldiers" holding AK-47 rifles and Bren light machine guns in the Waziristan tribal region near the border between Pakistan and Afghanistan. The report and photos have been widely spread by media agencies and Web sites across the world.

According to the report, American military experts call them "monkey terrorists."

The rest of it is just as good. There are no reports yet on whether the monkeys are working for the government or are XE contractors, or if Sean Hannity is throwing a fund-raiser to send bananas to the troops.
Posted by Susan of Texas at 4:01 PM

Nobody is showing Lance Link reruns any more.

Must be because the CIA bought all the tapes to use in training.

Okay, we need to immediately start air-drops of dvds of the Planet of the Apes movies into Waziristan. The Taliban don't know what they're getting into here.

More proof George W. Bush, in this case as channeled by Will Ferrell, was prescient. He tried to leave us with monkey warriors of our own, but we failed him.
(See "You're Welcome, America" if you don't know what I'm talking about.)

Flying monkey warriors and their feet of fury!