ARMed, Yet Out Of Bullets 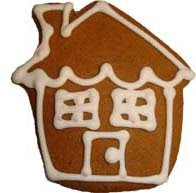 Another Cookie of Gratitude goes to IrvineRenter, who analyzes Megan McArdle's post on 30-year fixed rate mortgages so we don't have to. (Via commenter Mordo at Fire Megan McArdle.)

Another Ignorant and Misguided Attack on the 30-Year Fixed-Rate Mortgage
The 30-year fixed rate mortgage provides a reasonable balance between affordability and buying power. Historically, it has been associated with stable housing markets. Despite these facts, some foolishly want to see it replaced with adjustable-rate mortgages.

I recently wrote the post Government Bureaucrat Recommends Against 30-Year Fixed-Rate Mortgages. The author of that article wrote a scathing and dismissive rant against the 30-year fixed rate mortgage, and he provided no rational arguments for his opposition to its widespread use. I thought it was a one-off written by a crank who had too much coffee that day. Apparently he has company.

I am prone to write stinging rebukes to poorly written garbage on the web, but when I call someone out, I will devote the post to building a factual argument as to why they are wrong. I never ask anyone to just take my word for it because I am some kind of expert. Authority comes from the presentation of data in a compelling argument. Mindless rants don't make authors an authority, it makes them lunatics.

The source article for today's post is horrible. I don't know if the writer is a lunatic, but she certainly is very wrong about her reasons for opposing the 30-year fixed rate mortgage.

IrvineRenter goes on to explain the drawbacks of adjustable rate mortgages, which we have amply seen in the last couple of years. He or she does a good job of identifying all the methods McArdle uses to sway her audience in lieu of facts and reason.

It is rare that I find an article that annoys me as much as that one. I don't mind that people promote their agendas. I do it. I just prefer it when people do so with rational arguments based on facts and data. The piece of crap this woman wrote reads like something from a tawdry political blog. Many of the best articles I have read on the web have come from the Atlantic. This isn't one of them.

Megan's agenda cannot be promoted or defended with rational arguments based on facts and data.

She works for criminal megalomaniacs who are working to install an oligarchy to rule the world: for a while till it collapses. then they run for cover squealing for the Progressives to "save them".

People in other countries understand that their mortgage rate resets when interest rates go up.

Maybe I'm strange, but in my experience, people on a budget like to know the long term cost of things like housing so that they know how much outgoings they have each month. Of course to Megan, these things are unimportant.

I took a few months away from blogs, so I could have missed something, but...wasn't McArgleBargle supposed to be buying a house, at least since last year? Whatever happened to that project? I saw a recent TBogg post reproducing a McTweet about the joy of writing mortgage spreadsheets, but...really? Thinking back to when I bought my house in 1995, I went from "I'm ready to buy a house" to "I own a home" in much less time than it seems to take her to write mortgage spreadsheets.

McArdle said that she lost her house downpayment when the market crashed last year. (She also said her 401k took a hit this year.) And she complained that real estate prices in DC have not gone down enough to suit her. But evidently she managed to do it anyway.

...lost her down payment, doesn't like the price, can't write (or, for god's sake, download, browse to, etc.) a mortgage spreadsheet...it's remarkable how such a person can be a public policy expert on mortgage finance.

And to think when I started my blog break her expertise was with Pakistani rock salt.

She had her short term savings in the stock market? And she's considered qualified* to write on anything relating to money?

*yeah, I know, but apparently SOMEbody does.